Lebanon/Israel: Urgent need for arms embargo on Israel and Hizbullah

I really admire this statement on the issue of Lebanon/Israel. The photos, on the other hand are the one that I took during the protest of Malaysian civilian last 28th July, 2006 at Kg Baru. Thousands of people walk from the Kg baru mosque to the KL Concention Centre and direct to US Embassy to hand-over a memorandum. 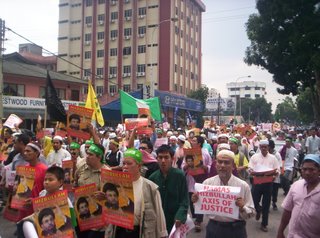 As civilians continue to bear the brunt of the conflict in Israel and Lebanon, Amnesty International called for an immediate arms embargo on both Israel and Hizbullah.

Amnesty International is gravely concerned about the continuing transfer of weapons from the US, via the UK, as information emerged that a UK airport is being used by USA cargo planes on their way to deliver munitions to Israel.

"The pattern of attacks and the extent of civilian casualties show a blatant disregard of international humanitarian law by Israel and Hizbullah," said Irene Khan, Amnesty International Secretary General. 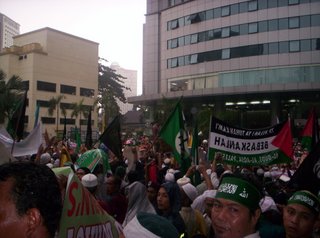 UK media have reported that two chartered Airbus A310 cargo planes filled with GBU 28 laser-guided bombs containing depleted uranium (DU) warheads and destined for the Israeli airforce landed at Prestwick airport, near Glasgow. The planes landed for refuelling and crew rests after flying from the US this past weekend.

Other reports claimed that the USA has requested that two more planes be permitted to land in the UK en route to Israel in the next two weeks. The reports said the aircraft will be carrying other weapons, including bombs and missiles.

"The UK government should refuse permission for its sea and air ports to be used by planes or ships carrying arms and military equipment destined for Israel or Hizbullah," said Ms Khan as Amnesty International wrote to the UK's Foreign Secretary Margaret Beckett. The organization also called on the UK to suspend the sale or transfer of all arms and military equipment to Israel.

"It is ridiculous to talk about providing humanitarian aid on the one hand, and to provide arms on the other. In the face of such human suffering in Lebanon and Israel, it is imperative that all governments stop the supply of arms and weapons to both sides immediately," stated Ms Khan.

KeADILan Youth calls for Investigation to Israel a...