The 83% voters turned-out last Tuesday has brought some curiosities to the oppositions especially from the Alternative Front (BA).

According to normal circumstances, only 60-70% would turn-out and cast their votes. 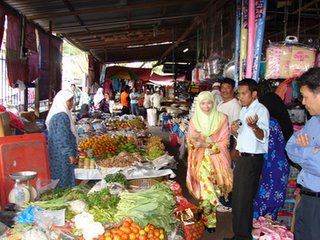 Before the election campaign starts, Abd Malek Hussin, the Chairman of Malaysians for Free and Fair Elections (MAFREL), the election watch organisation that is monitoring the Pengkalan Pasir by-election, was reported to be detained by the Pasir Mas police. He was released an hour later after the police recorded his statement.

According to Malek, the police told him that a police report had been made against MAFREL with regards to flyers they were distributing in the constituency. The flyers are about the Election Commissionâs (SPRâs) practice of recording the serial numbers of the voters on the counterfoil of the ballot papers.

Malek claimed that the vote is not a secret anymore. According to him, all the authorities have to do is go through the ballot papers that had been marked in favour of the opposition party, check the serial numbers on the ballot papers, then match them with the votersâ serial numbers on the counterfoil, and all those who had voted for the opposition would be known in no time at all.

This practice would certainly discourage many from voting for the opposition, in particular civil servants.

BA which originally a coalition among opposition parties to fight against the National Front (BN) to rule the Government of Malaysia is back side-by-side to achieve one goal; to retain the Pengkalan Pasirâs state seat in Kelantan.

The Pengkalan Pasirâs state by-election has brought back the spirit after the landslide victory on an anti-graft agenda of Abdullah Badawiâs clean image and the withdrawal of Democratic Actionâs Party (DAP) from BA. 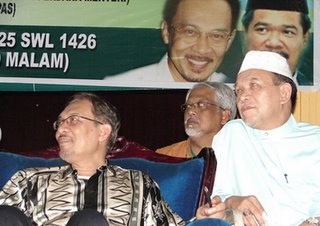 Since then, BN has gained wide publicity and support from the people.

DAP, in the other hand has its own reason not to participate in the BA coalition because of the Islamic State agenda which was brought by PAS last General Election.

BA who is supposed to fight against BN in one-to-one fight has also breached its own contract by seeing PAS contesting in two states by putting a candidate in keADILanâs constituency; one in Dengkil and the other one in Taman Medan â both in the state of Selangor.
During the Nomination Day last 26th November, President of the Peopleâs Justice Party (keADILan), Wan Azizah Ismail was seen together with other Pan-Malaysian Islamic Partyâs (PAS) leaders to accompany the candidate, Hanifah Ahmad submitting his nomination.

The by-election saw a three-cornered fight against an independent candidate, Dato Paduka Ibrahim Ali, the former Pasir Mas Umno division head who was dropped from the post two years ago. 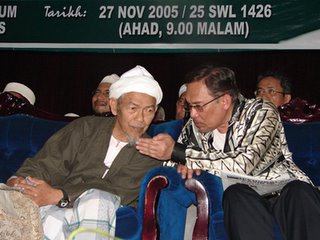 Former deputy premier Anwar Ibrahim has also hit the campaign trail for the first time since his release from jail, this time supporting the Islamic opposition and promising to tackle government corruption and incompetence.

Anwar Ibrahim who is also the Advisor to his wifeâs party, keADILan has burst back into the political fray after nearly six years in jail and political wilderness, drawing a crowd of 10,000 supporters at the election rally here in Kelantan.

He criticised the government's uphill fight against corruption and police brutality.

"The fact remains that corruption is more endemic now, is more rampant ...," he said.

Abdullah argues his anti-graft campaign is a long-term battle that is gaining traction. He cites some high-profile arrests, including a former minister, and suspensions from UMNO for party officials found guilty of internal vote-buying.

By election was held due to the death of the previous assemblyman, Wan Abdul Aziz Wan Jaafar (PAS) who died last 30th October of liver cancer.

He won the seat during the last General Election against Hanafi Mamat with a slim majority of 56.